The Running Effectiveness (RE) metric in Tredict

What is already standard for ambitious cyclists has also found its way into running in recent years - training control according to power. The technology and numbers nerds who run with a running power meter such as Stryd have certainly heard of Running Effectiveness (abbreviated RE). Developed by Andrew Coggan Ph.D., the metric is calculated as the ratio of running speed to specific running power. Specific running power relates your body weight to the power output.

In Tredict, the Running Effectiveness for the entire run can be found in the training detail view in the indicators card.

To find out the RE for a specific section or interval, the RE can also be displayed in the series chart of the training detail view (Select series -> Indicators -> Running Effectiveness). Then you can select the desired section in the chart and the RE will be displayed for this section.

Running Effectiveness (RE) in the indicators of an activity

What do I have to consider with Running Effectiveness?

The RE can only be compared if it was measured with the same device and similar external conditions were present!

The RE is influenced by the duration of the activity.
For shorter time periods (higher intensities), the RE is usually higher than for time periods of 20 minutes or more. Therefore, it is best to interpret RE at a specific intensity. For example, RE @FTP, RE @5km race pace, RE@ marathon pace, etc.

The RE is influenced by the gradient.
When running uphill, the speed is lower for the same power output. This results in a lower RE. Conversely, the RE is higher when running downhill, as higher speeds are achieved with the same power output. This effect can also be seen in the progress diagram of the training detail view in Tredict if you also display the altitude data in addition to the RE.

The RE is influenced by wind.
In a headwind, the speed is lower for the same power output. This results in a lower RE. With the introduction of the Stryd with wind measurement, the additional power required to overcome the running resistance (the runner's speed) and the air resistance (wind) is measured. The additional power measured to overcome running resistance occurs even when there is no wind. Therefore, the achievable RE is generally lower for the Stryd with wind measurement.

The RE is influenced by the type of power measurement and the measuring device.
The type of power measurement or the power meter used has a decisive influence on the amount of Running Effectiveness calculated. For example, the measured wattage of a "Polar Vantange" watch is higher than the power displayed by a Stryd foot pod. Accordingly, the RE of the same activity with a Polar watch is significantly higher than the RE of a Stryd.

Running Effectiveness in the series chart compared with the altitude profile. The RE is lower on ascents and higher on descents.

What do I do with Running Effectiveness?

Increase the speed
In running, speed is not only the result of the specific power output (W/kg). The person who converts the power most effectively into speed will also be able to achieve the faster time in the end.

This is made clear when the RE equation is rearranged:

Transformed according to speed:

The prerequisite for this is a valid FTP/CP. Ideally from an FTP/CP test, 2-3 weeks before the race and appropriate training for the planned distance. The RE can be taken from a previous race or a key workout. For example, for marathon race planning, you can take the RE of the 45-minute block from a 3-hour training run that has a 45-minute marathon pace block towards the end. To do this, simply mark the 45-minute block at marathon race pace in the progress diagram of the training detail view and read off the RE.

With power (FTP/CP) and RE, the speed can be predicted.

If you want to delve deeper, you can do so more precisely with the Riegel exponent. The % FTP/CP can also be further refined, as a 2:10 marathon can be run with a higher %FTP/CP than a 4:30 marathon. As an example for a calculation of a possible marathon time, let's assume a FTP/CP of 4.0 W/kg and a RE of 0.96 at marathon pace. A marathon is run at approx. 88% FTP/CP, this is taken into account in the calculation of the speed.

This speed can then be used to calculate the achievable target time.

Prediction of power
Conversely, the necessary power for the desired target time can also be calculated. As an example, someone wants to run the half marathon (HM) under one and a half hours and has a RE of 0.98 @HM pace.

Running Effectiveness (RE) is one of the most important metrics for analysing data from a running performance meter.

In Tredict, it can be displayed in the training detail view under indicators for the entire activity or in the progress chart for specific sections. RE evaluates how effectively the runner converts external power into speed in a given run, race, interval or running segment. It can also be used for various prediction models.

Those who want to delve deeper into power meters for running can check out the English-language Facebook groups "Stryd Community" and also specifically the group "Palladino Power Project". In the latter, Coach Steve Palladino shares his extensive knowledge and answers many questions from the community. The English-speaking Stryd Support and Coach Steve Palladino also get in touch here from time to time. Steve Palladino has also written various articles on running with power meters. This blog post is partly based on his articles and would not be possible if he did not provide his knowledge in such detail. 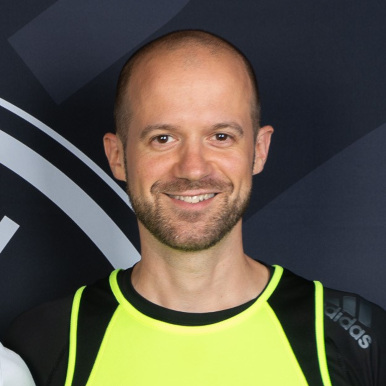 I am 38 years young and turned from an occasional jogger to a regular runner 5 years ago. As I am very interested in different training approaches and data analysis, I have also been running with a Stryd power meter since the end of 2018. You can currently find me in the results lists from 5km to marathon.