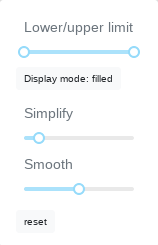 Smoothing in the series menu

Tredict displays the series data normally as raw data, just as your sports watch has recorded them. Apart from the fact that the series data of very long activities is downsampled during the display to keep the loading times within a tolerable range.

The display of the raw data is the unadorned and sometimes difficult to interpret truth.
We all want people to be honest with us, but we also don't mind a little cosmetics.

In Tredict series data refers to the data of a training that is available in a chronological sequence. These are your recorded heart rate data, the series of the wattage or simply the speed series.

Wattage smoothed - The power series is much easier to interpret after smoothing. Towards the end, the power increase can be seen well.

Simplification of time series simplifies the complexity of series data without changing the minimum and maximum values of the set range.

In a simplification, values are removed, but never added or changed.

As a result, the raw data, or reality if you will, continues to be mapped, albeit in some circumstances greatly simplified.

Simplified data can still be used as reference data.

Simplification is often used on elevation data, for example, to remove small imperfections.

Cadence simplified - The series has been significantly simplified while retaining its referential integrity, but is still difficult to interpret.

Smoothing calculates an average value over the set range. The calculation function is moved over the entire time series. This is also referred to as a "moving average". Tredict uses an exponential function for the moving average.

Smoothing has a distorting effect on the data as values are changed and added.

Smoothing a series can be applied whenever you want to look at trends or make highly noisy data humanly interpretable.

Smoothed data is not suitable as reference data, since no correct maximum or minimum values can be derived from them.

Cadence simplified and smoothed - The combined procedure of simplification and smoothing makes the series data of the cadence humanly interpretable.

Tredict would not be a good tool for training analysis if you could not combine both methods.

Highlighting distinctive trends in the series

By first simplifying the history series and then applying smoothing, you can highlight prominent points in the series.

An elevation profile reduced to salient points - The combination of simplification and smoothing highlights the two "peaks".