How the zones influence the effort 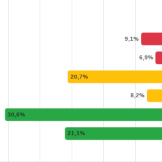 How is the effort calculated?

If possible, the time series recorded by your device will be used.

The total effort is derived from the total duration of the activity and the heart rate series. This is also done analogously with the wattage and speed, if available.

In the case of the heart rate, the effort is determined every second and added up further and further.

The amount of effort per second is roughly calculated as follows:

Effort from the heart rate

Effort from the power

The effort is calculated from the current power or wattage in relation to your FTP (Functional Threshold Power).

Effort from the speed

The effort is calculated from the current speed in relation to your FTPa (Functional Threshold Pace).

There is also a multiplier, which depends on the intensity and is explained below.

If you are a female athlete, the calculated effort is increased by an additional 20%. The increase is based on a comparison of world-class lists in athletics.

As you can see in the upper block, 3 efforts are calculated for this run. But in the summary of the run only the effort from the power is shown.

This is because I have set my zone priority chain as follows:

Now you might ask yourself what happens if there is no speed either? Well, then Tredict calculates a "fallback" effort, which assumes that the activity took place at 75% of your maximum heart rate. That can be off the mark at times, of course.

You can set the zone priority chain here: Tredict - Settings

How do my zones influence the calculation of the effort?

As you can see above in the effort object, the effort for heart rate, power and speed are quite different.

In this case this is because my zones are not optimally adjusted.

For the run, these power zones were used as the basis for calculation.

Power zones in the series view

Let's have a look at the intensity distribution, which can also be seen in the summary of the run above:

A multiplier is applied.

The zone distribution for the heart rate has a lower intensity compared to the power zones.

Let's now adjust the heart rate zones so that they better match the performance zones. You will know which values to take into account by finding out your lactactact threshold and FTP.

First, we create a new revision and adjust the date accordingly, so that this run is affected. Now I have simply lowered the moderate threshold zone by 3-4 heartbeats.

After saving, Tredict immediately recalculates all activities which are influenced by the revision date.

The effort of heart rate and power now match well compared to before.

Compare zones to determine the form

Now that you understand how to align different zones, you have a powerful tool to validate your general form.

For example, if you had your heart rate and power zones well aligned in, say, April, by taking different power determination tests, you can see if these zones diverge over time.

Since the performance curve is calculated from the effort, it is important for precise results to set the zones well and use the zone priority chain that is appropriate for a self fitting zone.

You can find out which zone priority chain is suitable for you in the FAQ.

I hope you liked the article and I could show you some context.